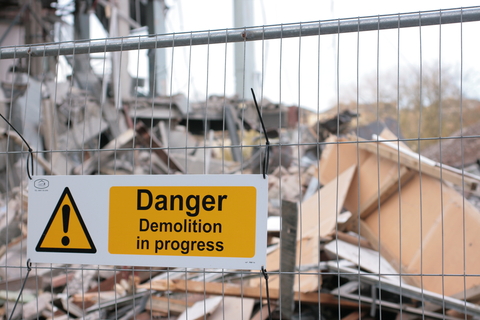 In the controlled demolition industry, the commonly-used term “implosion” is a bit of a misnomer. A building implosion is actually a large series of pre-calculated detonations that cut a structure’s supports in an intricately planned, timed and executed sequence of operation. Explosives remove internal supports first, and outer supports are pulled by gravity into the center of the structure. Controlled implosion can be done on a much shorter schedule than traditional demolition, and can greatly reduce project costs.  When engineered and executed properly, implosion can safely reduce a large building or structure to a pile of rubble in seconds, rather than months or years.

Safeguarding nearby people and surrounding buildings is most important part of implosion demolition, particularly when performed in an urban setting. Months of preparation and planning go into a project, and the actual implosion usually occurs on a Sunday morning, when there is minimal human activity.  Spectators who turn out to see the show are kept outside a safe perimeter. Experiencing a final check and countdown, feeling the percussion of explosives, and watching a building collapse gracefully into a neat pile of rubble in a matter of seconds, and hearing the cheer of the crowd is an impressive and exciting experience for demolition enthusiasts and workers alike.