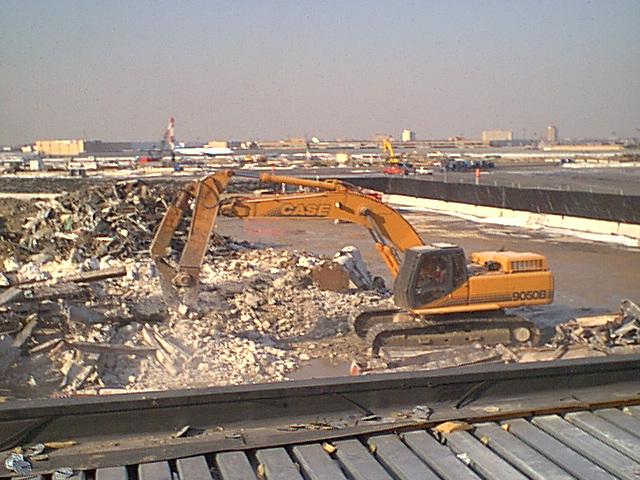 The project was made up of five integrated phases:

Phase One  involved the interior demolition of Concourse “C”.  This consisted of removing all ceiling tiles, sheetrock, wood, electrical conduit, electrical wiring and fiberglass insulating.  Due to the Port Authority severely restricting the generation of dust or debris that may find its way into the engines of the jet planes crews had to install a fabric barrier stretched over chain link fencing that had been installed on the perimeter of the work area.  The concourse was built with a large portion of the first level open enabling vehicles etc. to pass under the concourse during normal operation of the airport. This enabled crews to stage the debris containers under floor openings on the second floor, allowing crews to be able to load the containers with a minimum of movement, thus aiding in the elimination of airborne dust and debris. The roof of Concourse “C” and several baggage handling areas, which were part of the Terminal demolition, had a “membrane” roofing material covering a fiberglass insulating material.  This also had to be removed by hand before the building demolition could take place.

Phase Two consisted of the separation of Concourse “C” from the terminal building and then the actual demolition of the Concourse.  The separation of Concourse had to be done with the utmost care as the Terminal area was occupied and remained in use during the Concourse demolition.  This was accomplished by removing, by hand, the roofing, flooring and any connecting walls a minimum of 4 feet from the terminal.  Dismantlement crews then exposed the ironwork and carefully cut the connecting ironwork so as not to disturb the structural members to remain.  Once the building was separated, excavators equipped with, shears, and/or grapples, bulldozers, and loaders accomplished the remainder of the Concourse demolition.  The generation of dust was debris was kept to a minimum by using a water spray.

Phase Three nvolved the interior demolition of the center portion of the terminal that connected Terminal No. 8 to Terminal No. 9. During this entire hand separation phase, the terminal communication lines needed to remain operational.  During much of the interior demolition a portion of the connecting area remained open to the public.  To ensure the safety of the public, appropriate barricades were erected and maintained.

Phase Four consisted of the selective demolition to complete the separation of the two ends of the terminal connecting Terminal No. 8 and Terminal No. 9.  A portion of this work had to be done between midnight and 6:00AM to minimize exposure to the public.  The ceiling and portions of the walls had to be removed and structural steel exposed to enable the construction of, what would become the exterior walls of Terminals No. 8 and No. 9. Crews continued with the balance of the interior demolition as well as completing the hand separation of both ends of the connector.  To complete the hand separation it was necessary to saw cut the floors.  Utilizing a remote controlled jackhammer, crews removed a portion of the floors and removed the concrete from the structural steel where the separation cuts were to be made.  Once this was accomplished, sections of the structural steel were cut away leaving the connector section of the terminal separated from Terminals No. 8 and No. 9.

Phase Five of the demolition project consisted of the removing of the remainder of the terminal connector along with the baggage handling areas, roof structures and any remaining walls and materials in the basement area.  This was accomplished by conventional demolition using excavators with shear and grapple attachments.