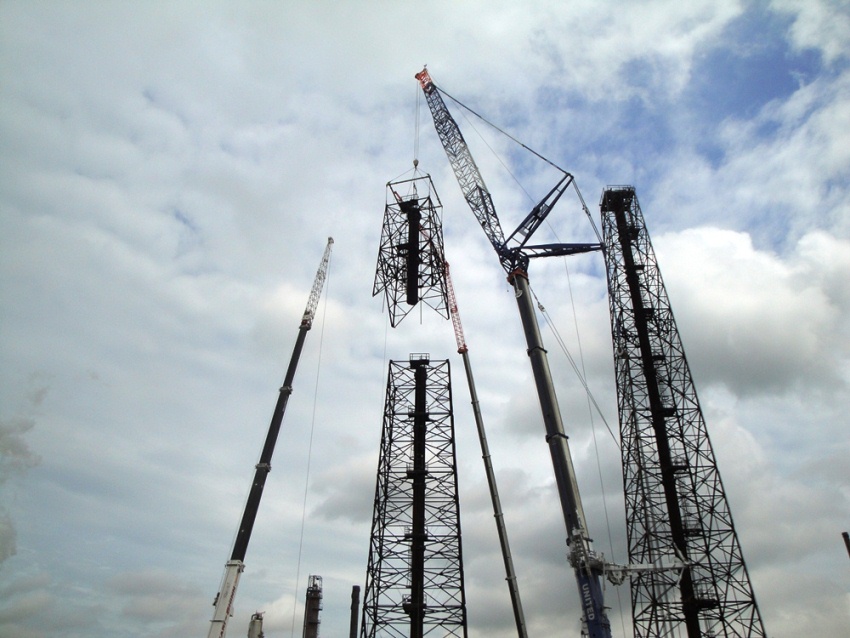 The overall scope of work consisted of the total demolition of a Unit within the active facility. Specifically, R. Baker & Son was tasked with the dismantlement and selective demolition of two (2) - 300 foot towers, a 160 feet tall x 16 feet diameter column, heat exchangers, tanks, boilers, cooling tower, rail loading equipment and other vessels, pumps and associated piping and steel work. In addition, a large storage tank needed to have residual materials cleaned from the tank and then subsequent demolition of the tank. Finally, obsolete piping needed to be removed from surrounding active pipe racks.

Safety was first and foremost on this project. Active plant roadways, lines and utilities bounded the work area (including a high pressure sulfur line and hydrogen line). In addition, fall protection was a major concern due to work at high elevations (men in man baskets) that would be needed to safely dismantle the towers and column. As such, prior to any work being conducted, numerous safety meetings and inspections were conducted. Documents developed included OSHA engineering surveys, critical lift and rigging plans stamped by a professional engineer and a site specific HASP and Work Plan. A mark-out of underground lines was performed, the area was secured with fencing and proper signage was placed. All work permits were issued on a daily basis and safety equipment was inspected daily and in place before any work commenced. On a daily basis, Job Safety Analysis (JSA) reports were developed and safety toolbox talks were conducted.

The Baker team spent a considerable amount of effort in developing the critical lift and engineered rigging plans. An engineering inspection of the towers and column was conducted to determine structural stability and integrity. A review of exiting drawings was also conducted. Once these tasks were completed, R. Baker & Son calculated where the cuts would be made on the column and towers. Appropriate crane sizes were then calculated based upon height of picks, swing radius of crane and weights of each piece to be rigged down.

In addition to wholesale demolition of structures, extreme care was taken around active equipment that needed to remain as well as active pipe racks. Air gaps were made to separate active components from structures and piping that were to be demolished. Air gaps were created by utilizing a combination of manual cutting (hot and cold cutting) and use of an excavator with shear as necessary.

Following clearing of the immediate areas around the towers and column, dismantling of these structures commenced. The large absorber Desuperheater was dismantled by high pressure water cutting means and dismantled in three sections. Access to water cutting and connecting to T-301 was performed utilizing two (2) - 70 ton hydraulic cranes equipped with man baskets. Once pre-cutting was completed, a 600 ton crane was mobilized to the site. Each section was rigged and lowered to the ground by the 600 ton hydraulic crane.

Rigging and dismantling of the two 300 foot tall towers then commenced. Spider lifts were installed to facilitate the rigging and removal of stack sections in 50 feet intervals. The goal was to attach rigging points at two elevations within each 50 foot interval. Structure and stacks were then attached to a 600 ton hydraulic crane. Workers utilizing man baskets attached to two 190 ton hydraulic cranes hot cut structure at 50’ intervals. The dismantled 50 foot sections were then lowered the ground for final demolition by awaiting excavators with shears. The last/bottom 50’ of stacks and tower at ground level will be dismantled using an excavator with shear and grapple attachment.

A storage tank containing a significant quantity of residual materials also required cleaning and demolition. A secondary containment was setup in front of the tank. An approximate 10 feet wide by 12 feet high opening in the side of the tank was cut using water jet cutting. A mini excavator and a Bobcat skid steer were utilized to assist with removal of the residuals. Proper confined space entry safety as well as fire safety was strictly enforced at all times. Removed materials were solidified and placed into the client’s containers for proper disposal. The tank was carefully dismantled in a manner to safely demolish structure without uncontrolled collapse.

The last phase of work conducted was to remove obsolete piping from active pipe racks. Prior to any cutting and removal of piping, R. Baker & Son with the client’s assistance confirmed that each line to be removed was de-energized, drained and disconnected. Pipes to be cut and cut points were verified twice between a coordinated effort with R. Baker & Son and the client’s personnel. Work started from the open end of a pipe to ensure that it was not an active line. Dismantlement workers were in man-lifts as well as in the pipe rack itself. 100% Fall Protection was maintained at all times. Pipe sections were secured by rope, come-along or crane. After being cut free, piping was lowered to ground (no free fall of dismantled piping).

Due to the client’s and R. Baker & Son’s attention to pre-planning, safety implementation and work execution, the project was successfully completed on schedule. Total safe work hours were 31,296 and 5 million lbs of scrap materials were recycled.