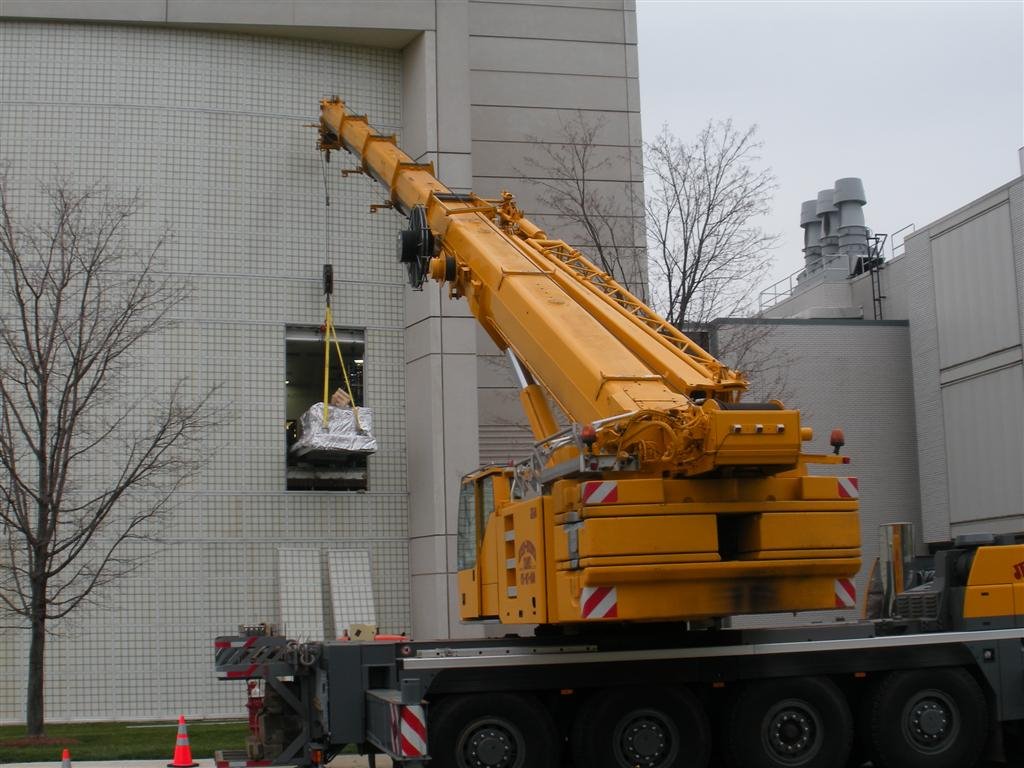 R. Baker & Son All Industrial Services, a leading nationwide demolition, dismantlement and rigging contractor, recently relocated a Robatel centrifuge at the Northern New Jersey facility of a global pharmaceutical corporation. The client selected R. Baker & Son to perform the work based on past successful projects completed as well as R. Baker & Son’s strict adherence to safety as well as their professionalism and attention to detail.

The basic scope of work consisted of relocating the Robatel centrifuge from a 2nd story portion of the facility to an onsite warehouse. The work needed to be done in a safe manner with no disruption to the facility operations.

The Robatel centrifuge (approx 6ft x 6ft x 5ft deep) was located on a concrete base in a back room on the second floor. It was determined that using a crane to remove the item from its original position would be unfeasible due to the cost of bringing a crane big enough to reach it as well as the large amount of preparation work that would be required to make access to the unit.

To rig the unit from the concrete base, R. Baker & Son utilized four (4) 11-ton hydraulic toe jacks to lift the Robatel so as to allow equipment skates to be placed underneath it. Steel plates were then placed down in order to carefully roll the Robatel unit onto a cribbing pile. The same hydraulic jacks were used to rig the unit from the cribbing down to the second floor surface elevation and onto a set of non-marking neoprene skates so as to not mark the floor in the sterile pharmaceutical manufacturing environment. The unit was then rolled through the second floor corridor of the building to another room on the other side of the building.

Once in the staging room, the exterior wall blast panels were removed to provide access to the outside. A 40 ft boom lift was utilized to assist with the panel removal. All the panels were carefully removed and staged to the side for reinstallation at the end of the project.

To provide access and sound footing to the side of the building, a crane mat temporary access road needed to be created. 24 standard size wooden crane mats and over a dozen 8 ft x 20 ft steel plates were utilized for the crane mat bridge.  A Manitou telescopic handler (lift capacity of 14,000 lb., lift height of 19’, forward reach of 12' 2” with a 101.5 HP Perkins engine) was utilized to move and set the mats and plates. The rigging crews determined the best pattern for the plates and mats as well as assured that the bridge system was level and at proper height.

With the access road in-place, the R. Baker & Son rigging crews then setup to remove the Robatel unit from the second floor of the building. The rigging crew forces were split with half the crew going into the building while the other half remained at ground level with the Manitou telescopic handler.

The telescopic handler was placed into position near the building and then the forks were carefully moved into position near the Robatel on the 2nd floor. The Robatel was then safely attached to the forklift with proper rigging in order to prevent the Robatel from sliding off the telescopic handler’s forks. The operator of the forklift then slowly lowered the unit to the ground level and then carefully transported it to the nearby warehousing area.

Several final tasks needed to be completed prior to R. Baker & Son crews de-mobilizing from the site. The blast panels were rigged back up to the second floor and re-installed to original condition. The temporary access road bridge was dismantled and a final sweep and cleanup of the area was completed.

The project was a success for numerous reasons. The client was very pleased with the quality of the work, the centrifuge was removed without any damage (to the unit or building) and the active facility operations were not disturbed. In addition, no injuries or incidents occurred and the project was completed on schedule and budget.