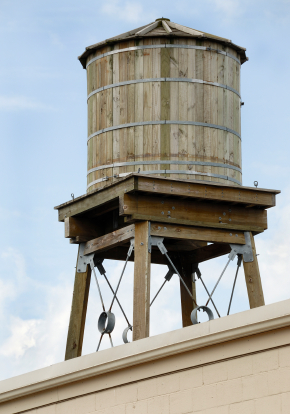 Wooden rooftop water tanks are common features of the New York City skyline. The barrel-like, cone-roofed structures first appeared on city rooftops in the late 19th century, and have been an integral part of New York’s water system ever since.

After the Civil War, New York flourished and tall buildings began to crop up around the city. Because New York is built on shallow bedrock, natural water pressure was too low to raise water to the upper stories of these buildings, so rooftop tanks were introduced. Nowadays, electric pumps that are commonly used in U.S. cities are impractical with New York’s aged infrastructure, and rooftop tanks still provide the ideal solution to the city’s water needs.

The first rooftop water tanks were constructed by barrel makers, and even today about 99% are still made of wood. Steel tanks can cost up to four times more, require far more maintenance, and can impart a metallic taste to the water. Wood has natural insulating properties, keeping water cool in summer and preventing freezing in winter.

There are only two companies that currently build water tanks in New York. These “tankmen”, as they’re known, can construct the body of a tank in as little as two hours, setting boards in place using only a hammer and a rope. Tank walls, made from either cedar or California redwood and held together by cables or “hoops”, leak when first filled. As the wood becomes soaked, it swells and the tank becomes impermeable. No sealant is necessary.

The average rooftop water tank is about 10-12 feet high and stores 5,000 to 10,000 gallons of water. As water is used and levels drop, a pump is triggered and the tank is refilled. Water used for drinking and bathing is siphoned from the top of the water. Water in the lower half, where sediment settles, is reserved to fight fires.

Tank maintenance is a straightforward process that takes about six hours and causes little inconvenience to building residents. Water is drained and the interior is scrubbed with a chlorine solution. The tank is refilled, a second chlorine solution is added, allowed to soak, then flushed out. Switches are lubricated, holes are caulked, and hoops are tightened. The supporting structure also requires maintenance – mostly scraping and painting – on a regular basis. Rooftop water tanks have an average lifespan of 20 to 25 years, and when particularly well-maintained tanks can last as much as 30% longer.

Though rooftop water tank technology was developed more than 150 years ago, New York’s reliance on them is not expected to change any time soon. The method is simple, inexpensive, effective, and well-suited to existing city infrastructure. R. Baker & Son has been involved in a number of renovation and demolition projects in which rooftop water tanks have been relocated or dismantled. Though they look like relics of the past, rooftop tanks will undoubtedly remain a customary fixture of the New York cityscape for many years to come.