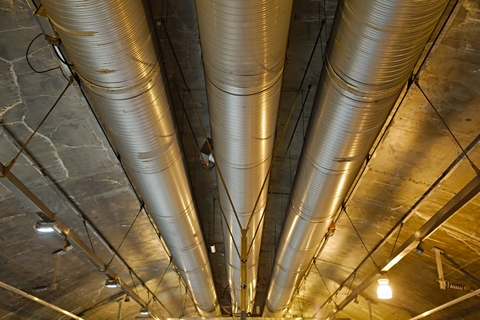 Over decades at a Central New Jersey facility, a long MEP utility tunnel was used to carry various plumbing, HVAC, electrical and control lines. When systems began to age and several plumbing lines began to show signs of deterioration and leaking recently, plans were developed to replace the old pipes with new. It was discovered during this planning process that there were many old, abandoned electrical and HVAC piping lines that required removal. The project became a cleanup of the tunnel system aimed not only at replacing what was failing, but a demolition operation to remove what was no longer in use so that future lines could be installed.

The utility tunnel functioned as the backbone of the facility, running below multiple buildings servicing various areas, with the tunnel ceiling and walls supporting a multitude of piping and conduit. Demolition company & rigging services R. Baker & Son was brought in to meet the unique challenge of coming up with a way to safely and efficiently remove demolition waste from the tunnel and bring new materials. Though the tunnel had multiple entrances and exits, it was important that the demolition waste be routed to the end of the tunnel nearest the loading dock for removal. To achieve this, the Baker Team built a custom heavy-duty trolley, six feet long by three feet wide, with rubber wheels and 3-foot high posts to contain pipe and conduit, as well as rubber wheels on the sides to roll along the tunnel’s walls to eliminate friction. It was operated using steel cables, pulleys and an electric winch. A few test runs with 400 lbs. of weight were successful. The trolley proved so successful in the demolition of the tunnel and transport of new materials that the customer purchased it at the end of the project, parking it in the tunnel for future needs.