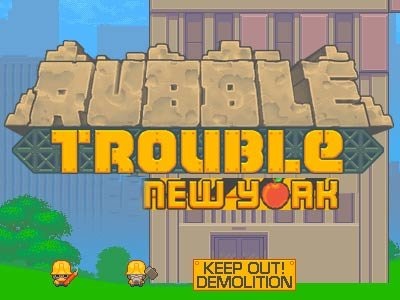 Being a demolition contractor in the New York metro area can be challenging to say the least. There are many planning and safety procedures to follow, permits to be obtained, tools and equipment to be maintained, and tight schedules to be met. It's a tough job, and not very glamorous. However, someone has found a way to make demolition in New York fun for kids with Rubble Trouble New York, a free online video game. You don't need to be a demolition contractor to play, all you need is an appetite for destruction.

Rubble Trouble New York is a physics-based strategy demolition game first released in 2010. Whether its interior demolition or taking down an industrial complex, Rubble Trouble New York has 32 levels to master. Each level, players are provided with a different demolition tool, such as drills, wrecking balls, explosives, wrecking tools, and even missiles, to earn money before running out of tool power. Structures become progressively more difficult to demolish, and players must avoid damaging other buildings and injuring construction workers.

Rubble Trouble New York is popular among kids who like demolition, wrecking and construction games. We at R. Baker & Son gave it a try and could not get past level 9. Maybe you'll have more luck.