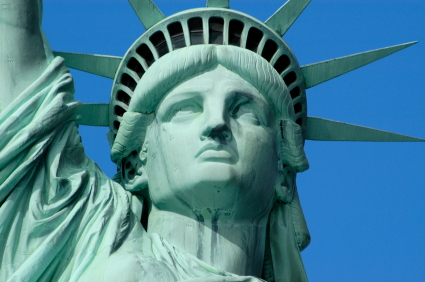 In 2012, R. Baker & Son participated in a year-long major renovation of the Statue of Liberty to make the interior safer and more accessible.  This project is one of many R. Baker & Son has performed on local and national landmarks including the United Nations building, the Intrepid Sea, Air and Space Museum, the 9/11 Memorial Museum, and Space Shuttle Enterprise.

The Statue of Liberty was a gift from the people France in recognition of U.S. ideals of freedom and democracy, and to commemorate the 1886 centennial of the Declaration of Independence.  Sculptor Auguste Bartholdi was commissioned in 1876 to design the colossal statue, and Gustave Eiffel was devised the complex iron and steel support framework.  The 151-foot copper statue was constructed in phases in France.  Once completed, it was disassembled into 350 pieces, packed into crates, and shipped to the United States to be reassembled on its pedestal on Bedloe’s Island in New York Harbor.

The Statue of Liberty’s 89-foot granite pedestal was constructed on in the center of the 11-pointed star-shaped walls of Fort Wood.  Excavation of the foundation was complicated when crews encountered heavy stone masonry and concrete fort reinforcements.  The concrete base, poured at a depth of 20 feet in the center and faced with granite blocks, was the largest mass of concrete poured to that time.  It is still considered to be one of the heaviest pieces of masonry every built.

To ensure that the statue would withstand high winds, workers built four huge iron girders into the walls at the 29-foot level.  At eighty-five feet, similar girders were placed, and the two sets were interconnected and extended into the statue framework, allowing wind force to be carried down to the lower reinforcement girders.  It is estimated that the statue can withstand winds up to 125 miles per hour.

Upon her arrival at Bedloe’s Island in June of 1886, it took four months to erect Lady Liberty.  Eiffel’s framework was anchored to the pedestal and the sections of copper skin were attached by workers who dangled from ropes.  Plans to install floodlights on the torch balcony were scrapped due to fears that ships pilots would be blinded.  Instead, stained glass portholes were cut into the torch, lights were placed inside, and a power plant was constructed to supply power.  At completion, the Statue of Liberty and her pedestal stood a towering 306 feet to the tip of her torch.  She was formally unveiled on October 28, 1886 before a cheering crowd of one million spectators and President Grover Cleveland.

There have been many improvements, renovations and upgrades to the Statue of Liberty since then.  Lighting the statue has caused many a challenge over the years, and the electrical system has been replaced several times over.  In 1937 many iron supports and the original cast iron staircase were replaced due to rusting.  Various steps were taken to prevent leaks that caused water damage over the years including layers of coal tar on the interior of the statue and special copper sheathing.

The largest restoration was done in the 1980s for the statue’s centennial celebration.  Extensive repairs were made to the copper skin both inside and out, and the entire armature was replaced with stainless steel.  Consideration was given to replacing the arm and shoulder, which were found to have been improperly attached to the main structure, but the National Park Service effectively argued that they be repaired and realigned instead.  The torch, which had been leaking water for decades, was replaced with an exact replica of Bartholdi’s unaltered torch.  In the pedestal, a new, wide entrance was created and a modern elevator was installed.  An emergency elevator was also installed within the statue itself.

On October 29, 2011, the statue and pedestal were closed for the $27.25 million renovation project in which R. Baker & Son heavily participated.  Upgrades included a new exterior granite staircase, improved pedestal elevators, and wheelchair access to the observation decks, as well as bathroom renovations, updated electrical and mechanical systems, and fire suppression equipment.  Two open staircases were separated from each other and replaced, and one was walled in for improved safety and emergency evacuation.  Pedestal elevators were replaced and relocated to a new fire-resistant shaft.  Unlike the renovation that occurred in 1980s, the exterior of the statue and pedestal remained unmarred by scaffolding for the duration of the project.

R. Baker & Son’s portion of the project required careful planning and coordination of demolition sequences and procedures.  The project had an extremely tight schedule with no float, and work had to be performed as safely and quickly as possible.  Stairwells, landings, and egress points were carefully measured, supported, and cut so as not to destabilize other areas while allowing removal of debris through doorways and windows.

It was crucial for workers to exercise extreme care to avoid even the slightest damage to the stone and metal features of the historic monument.  R. Baker & Son crews performed seamlessly under pressure while as thousands of curious onlookers watched and snapped photographs as each piece was rigged into place, circumstances that most construction workers are unaccustomed to.

The Statue of Liberty renovation project was successfully completed on time and reopened to the public on October 28, 2012. Sadly, Superstorm Sandy struck the East Coast the very next day, severely damaging Liberty Island and closing it indefinitely until repairs can be made.  Though the statue and newly-renovated pedestal were spared, floodwaters reached the base of the statue and inflicted severe damage to Liberty Island, destroying walkways, separating the seawall from the island, and buckling the visitors’ pier.  The power system and backup generator were destroyed when 8 feet of water flooded the basement where they were housed.  Cleanup and repairs are estimated to cost $59 million.  But despite these serious setbacks, Liberty Island will be fully restored to its former grandeur, and Lady Liberty will continue to be an enduring symbol of American freedom for many years to come.