What is Buried in Concrete is an Important Part of Demolition 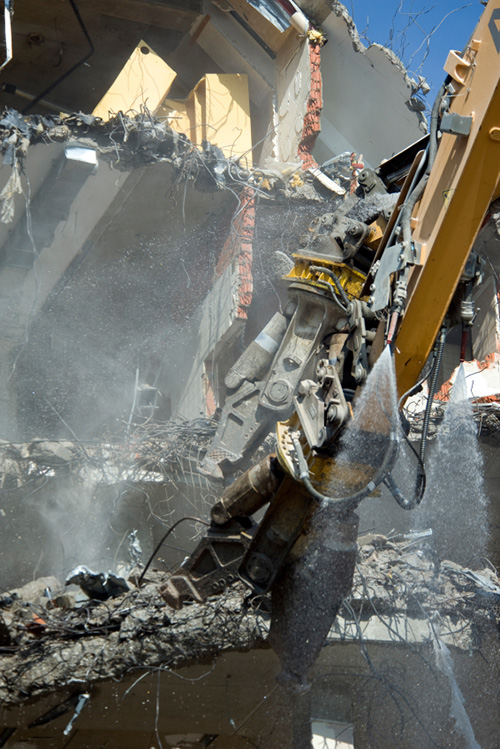 The history of concrete goes back at least 8,000 years, and it has been used extensively in construction since the Roman Empire. Next to water, it is the second most-consumed material on earth. Consequently, millions of tons of concrete are removed from demolition sites around the world each year. Knowing what’s buried in the concrete is an important part of every demolition project.

Demolition of concrete is not a straightforward, cut-and-dried process. It is not uncommon for contractors to have embedded rebar, conduit, plumbing piping, and, occasionally, duct work in cement during construction, rather than installing them overhead. If blueprints are not available at demolition, as is often the case, demolition contractors must do some detective work to determine what is present within the walls and floors of a concrete structure. This is crucial on selective demolition projects, where damaging or severing an electrical feeder, fiber optic, or plumbing line can be dangerous and potentially catastrophic to operations.

The first step in finding piping and/or ductwork lines in concrete is to identify where they might originate, such as in mechanical rooms, shafts, and basement areas, and determine whether the line is live. If a line is to remain in-use, an MOP (method of procedure) must be developed to identify, mark, and preserve these utilities. Strick lockout/tagout practices must be followed. Paths can often be traced with a capacitive voltage sensor, or tick tester, which sends a signal through the conduit or pipe, and workers use a detector to mark the line in question. Size and depth of a line can be determined by x-raying sections of the concrete.

With over eighty years of experience in demolition, R. Baker & Son is an established expert in concrete removal. We properly identify what’s hiding within clients’ walls and floors before cutting, chopping, or coring concrete, ensuring a safe and successful outcome on every demolition project.