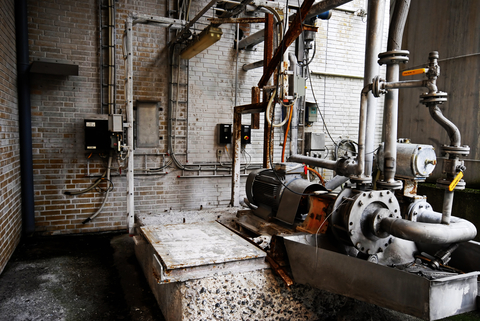 During a plant consolidation project, a three-story, 39,000 sq. ft. chemical pilot plant required demolition to make way for a future Butler storage building. R. Baker & Son worked closely with the client on overall safety, dust control, shutting down, locking out, and removing all utilities. Interestingly, our company had, thirty years earlier, rigged in all of the process equipment that was now being removed.

The building had easily-removable, translucent plastic panels on the north and south sides of the building through which much of the equipment was removed. This included reactors, heat exchangers, low-temperature chillers, and associated piping, as well as a 100,000 CFM air handling unit and all ductwork and electrical throughout the facility.

The structure was steel with concrete-filled block walls, and the east and west exteriors were brick. The demolition required two large excavators equipped with hydraulic hammers and shears working from each side. There was limited room to maneuver the excavators, so demolition debris removal required more careful coordination than usual. Debris was removed using skid steers and loaders to waiting trucks.

The building and slab were removed, leaving grade beams below. Underground piping was removed back to the main on the street and capped. All debris had been cleared from the site, three-quarter-inch gravel was brought in and spread where the building once stood. The project went smoothly and the owner was very satisfied as the Butler buildings were scheduled to be delivered and erected in four weeks’ time.