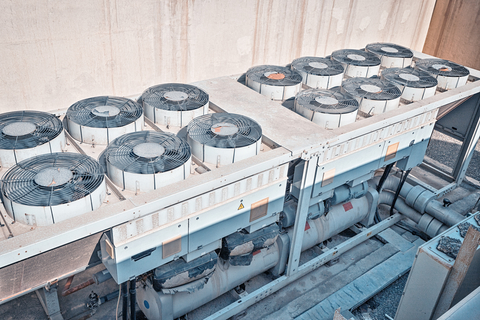 A 55,000 sq. ft. pharmaceutical facility in New Jersey was slated to undergo demolition. The 60-year-old building had undergone previous renovations over the years during which obsolete HVAC equipment had been decommissioned but never removed from the rooftop. R. Baker & Son had previously completed demolition of the building’s interior, and now we were tasked with decommissioning and dismantling of equipment that had been in use until recently, dismantling of the old equipment, and rigging the disassembled equipment from the roof. This included air handlers, heat exchangers, scrubbers, large exhaust fans, chillers, and cooling towers, as well as a penthouse structure.

Following abatement of lead paint and asbestos, recovery of refrigerant and oil from old compressors and pumps, construction of barricades, and installation of a safety line at the edge of the roof, the Baker team began the dismantlement process. Several four-person crews worked inward from the edge of the building using saws, cutting torches, fire blankets, extinguishers, and ladders. With very little room to maneuver among the large machinery, clear radio communication and hand signals during rigging were particularly critical to preserving safety. Access to the rear and sides of the building was limited due to pipe racks and cable trays that were still in service for other buildings on the campus and had to remain in place until the end, So the dismantled equipment was rigged from the front of the building to waiting for lowboy tractor-trailers using two 80-ton hydraulic cranes with extended jib.

The decommissioning and dismantling phase of the project was completed safely and on schedule, paving the way for R. Baker & Son to begin the final phase of demolition.