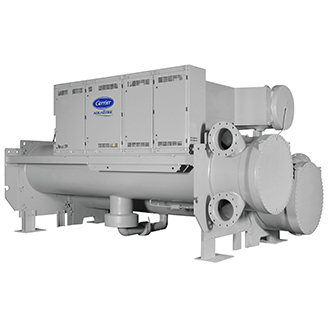 Work included removal of a single centrifugal fan from each unit and replacing them with fan array assemblies of multiple fans. This was achieved by cutting a neat opening in the side of each air handling unit, rigging out the larger fans, and carefully installing walls of sixteen smaller fans inside the units.

Upper and lower chilled water coils were also replaced in the four air handling units. Working with the mechanical contractor, the coils were disconnected and removed and replaced with a larger row of coils. R. Baker & Son also worked with the sheet metal contractor, who installed new, larger condensate pans at the base of the new coils. New and existing coils and fans were rigged from the penthouse with an 80-ton hydraulic crane. Skates and dollies were utilized to route the equipment through the penthouse, and a gantry was used to remove and install the new ½-ton coils. Once rigging of the new fan array and coils had been completed, the sheet metal contract replaced the existing filter rack with prefabricated filter racks, and the units were sealed up to complete the piping, electrical and fan array controls.

Work on the air handling units was performed one at a time, as all four could not be shut down at once, and temporary cooling was provided during each shutdown. Each unit took 2.5 days working on two shifts to complete, near record time.