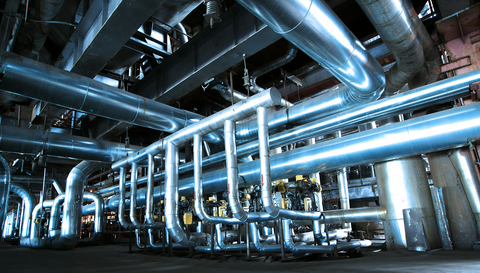 A rare malfunction in a large HVAC system caused exhaust ductwork to collapse due to a severe negative pressure condition, and building owners were faced with a dilemma. The 160-ft. duct had to be replaced as soon as possible, but it ran 22 feet above the finished floor surrounded by a maze of conduit, piping, sprinkler, controls, and pneumatic lines, to name just a few, making it virtually impossible to access. When the job was deemed too difficult and dangerous for sheet metal workers, R. Baker & Son was called in.

After a careful assessment of the situation, the Baker Team determined that there were only two areas from which the collapsed 40-inch. stainless steel round duct could be accessed. The entire run would need be cut out piece by piece and removed from these two areas and new duct would be installed through these same openings. A Baker demolition crew erected two scaffolds and fastened steel walkways between trapeze supports to give some walkable access and fall protection tie-off points, then set up a cabling system upon which canvas slings would be suspended.

Next, demolition workers used hydraulic shears to cut out 6- to 8-ft. sections of the old duct. The sections were cradled in the canvas slings and carefully lowered to the mechanical room floor below. Newly-fabricated 6- to 8-ft. flanged sections of stainless steel duct was brought in, and Baker crew members carefully threaded the new sections one by one through the maze of pipes, bolted the flanges with gasketing, and tightened the bolts down with torque wrenches to eliminate air leaks. Once the ductwork was successfully pressure tested, the Baker Team removed the scaffolding and the since-repaired HVAC system was put back on line.