Demolition by Implosion an Impressive Sight to See 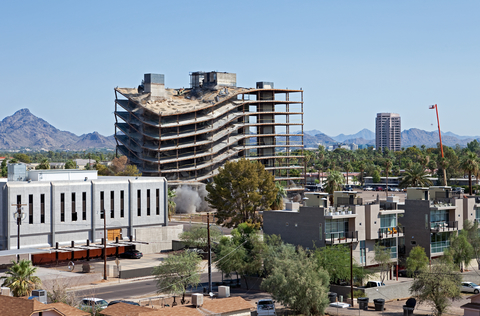 Demolition by implosion, in which explosives are used to make a building collapse down into its footprint, can be an impressive sight to see. Huge buildings, arenas, bridges and other structures that took years to build can be taken down in a matter of seconds with explosives that are strategically placed and timed to undermine supports.

Implosion of tall buildings and landmark structures throughout the world are often highly-publicized spectator events, with hundreds or even thousands of people in attendance. Most demolition implosions are scheduled for Sunday mornings when area activity is at a minimum. Media outlets and photographers perch on ideal viewing spots, and remote cameras are set up to capture close-up views of demolition. Bright banners and advertisements are often hung on the building slated to be demolished.

Cordoned-off viewing areas have food trucks, vendors and musical entertainment for the enjoyment of the spectators, and toy detonators are handed out to children. Speeches often precede the main event talking about the building’s history and the preparations that went into preparing for the implosion. The crowd is sometimes treated with a fireworks display, some in the sky above the demolition site, others emanating from the doomed structure itself.

As the scheduled implosion time approaches, the demolition crew performs a final check and the countdown begins. At zero, children press their plungers, setting off (in their minds) the spectacular sequence of explosions that cause the building to neatly collapse in on itself in a cloud of dust, and awed spectators cheer and applaud the remarkable show.