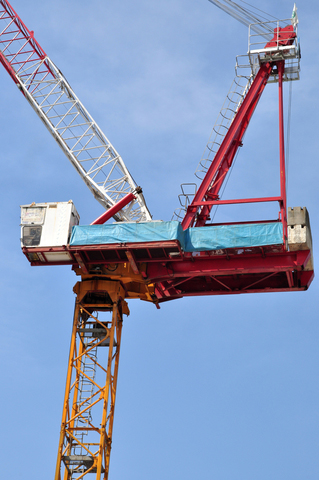 Tower cranes are commonly used for rigging materials and equipment during the construction of tall buildings. The standard tower crane consists of a base fixed to a concrete pad, the mast, the slewing unit (the mechanism that allows the crane to rotate), operating cabin, and jib. There are two main types of jib: the more-common hammerhead (level) jib and the luffing jib. Selection of which jib to use depends mostly on a project’s specific rigging requirements as well as its restrictions.

A luffing jib consists of an A-frame and a boom section. Unlike a hammerhead jib, a luffing jib can move vertically to lift a load. With their high vertical reach, short counter jib, and variable working radius, luffing jibs are often used for rigging on job sites in congested areas, narrow spaces, when there are other cranes on the job site, or where clearance is otherwise limited, which is why they are frequently seen in dense urban environments like New York.

Luffing jib cranes generally have a larger lifting capacity and better perching accuracy.  It has a higher vertical reach, so it can accomplish some rigging tasks with a lower tower height. Luffing jib cranes do have some disadvantages. Luffers are generally heavier than a comparable hammerhead crane and the rigging process is slower.  Due to their complexity, they are usually more costly.